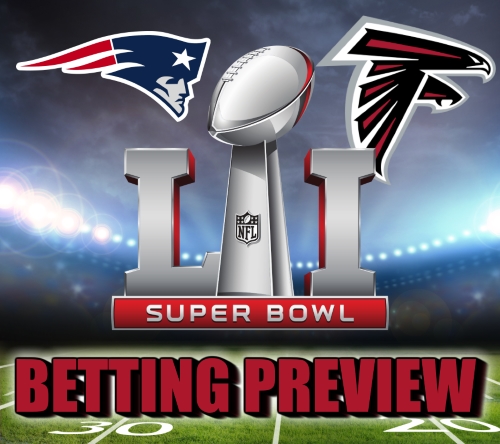 This means that if you had taken one of these bets for $100, you could win $600 or $8,000 respectively.  Sometimes, it pays to take these early bets.  Speaking of early Super Bowl LI Odds, this year New England started out as a -3 favorite and even though the point spread has not changed since then, the over/under certainly has changed from 57.5 points  to 59 points.

This will be the second time that Atlanta will play in the Super Bowl (last time was in 1998) while the Patriots will be the veteran team going for their 9th Super Bowl appearance with Tom Brady hoping to become the first quarterback to win five Super Bowl rings.

The player matchup everyone is eager to see is going to be Julio Jones of the Falcons vs. Malcom Butler of the Patriots.  At 6’3”, Jones is one of the best receiver in the NFL and finished second in the league with 1,409 receiving yards.  When he is teamed up with MVP Quarterback Matt Ryan, the two become a force of nature.

On the other hand, Patriots cornerback, Malcom Butler has been eagerly waiting for his chance to go up against Jones.  In order for the Patriots to win Super Bowl LI, Butler will have to find a way to slow down the advance of Jones.

Butler has been a member of the Patriots secondary and has been waiting for this matchup since 2012.  Standing at 5’11, Butler will definitively have his work cut out for him as that 4 inches in height difference will certainly give Jones the edge.

Super Bowl tickets this year are a record breaking high with ticket prices range from $3,600 to $11,000 from the box office compared to last year where tickets ranged from $2,500 to $9,000. For those who are last minute buyers and are stuck buying the tickets second hand, expect to pay much more.

Even though going to the Super Bowl is outside of most people’s reach, you can still enjoy the game and make some money on the side by betting on the Super Bowl.  If you can’t make it to Vegas this year to place your bet, no worries as you can still bet online using online sportsbooks like BetOnline.ag and BetPhoenix.ag.