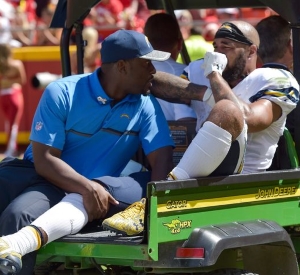 Mario Williams of the Miami Dolphins

The Defense End placed constant pressure on Russell Wilson last Sunday in the hope to keep him and check and possibly win the game.  It didn’t happen but the Dolphins certainly put up a fight until Williams was taken out of the game for a concussion.

He had two tackles and a quarterback sack during the game where he and the defensive team were able to overpower the Seattle offensive line.

Williams who is an important part of Miami’s defense team and it is currently unknown as to when he will be playing again as he is currently in the concussion protocol.  This will have a large impact on Week 2 matchup against the Patriots since their defense line up is now in serious trouble with defensive tackle, Earl Mitchell on injured reserve for a calf injury and Jordan Phillips still battling an injured ankle.

Brian Cushing of the Houston Texans

Middle linebacker, Brian Cushing, the NFL’s third-ranked defense last season suffered a sprained medical collateral ligament on his right knee and is expected to be benched for at least 4 to 6 weeks.  Cushing may have a history of problems with his left knee but has always managed to bounce back.

The Texans have replaced him with Max Bullough.

Keenan Allen of the Chargers

Last Monday, the Chargers announced that WR will miss the rest of the season after an ACL injury to his right knee during the second quarter of the game against the Kansas City Chiefs.  This was a heartbreaking injury for Allen who had missed the second half of the 2015 season due to a lacerated injury.

The injury prone Allen is a big loss to the Chargers and many online sportsbooks are weighing their lines options as they go against the Jaguars next Sunday.

They were of course dozen more injuries but these are the top three injuries that will affect the nfl betting odds during Week 2 of the NFL.

In the meanwhile, if you are still looking for a reliable sportsbook then make sure to check out our where to bet on football page to get the best sportsbook deal possible.