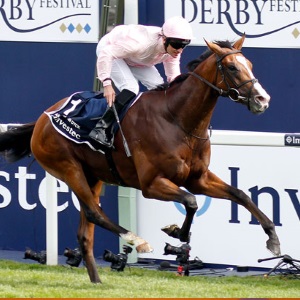 O’Brien’s colt started the season at Lingfield in the Derby Trial which proved to be a successful reappearance. He then went into the Derby as one of a number of contenders for O'Brien, giving his trainer his seventh success in the race.

The Ballydoyle trainer has an even better record in the Irish Derby as he has won the Irish Classic 12 times. He will be hoping his horse can justify favouritism and follow in the footsteps of Camelot and Australia who both completed the Derby double for him.

Sir Dragonet Has Chance to Make Up for Epsom Defeat

Sir Dragonet went into the Derby at Epsom as the favourite to come out on top, but O’Brien’s colt suffered the first defeat of his career. The son of Camelot is set to take on Anthony Van Dyck, once again, at the Curragh where he is at 7/2 in the horse racing betting.

The Irish horse never ran as a two-year-old, he made his debut back in April at Tipperary where he was impressive in scoring on his opening run in the maiden to quickly establish himself as a Derby contender.

Sir Dragonet enhanced his Derby claims even further at the Chester May Meeting with victory in the Group Three Chester Vase Stakes. Under the hands of Donnacha O’Brien, the pair went eight lengths clear in the final furlong which forced the bookmakers to make him the favourite at Epsom.

The Chester Vase winner was held up in midfield at Epsom and didn’t get the cleanest of passages in the race. O’Brien’s runner was in with a strong chance inside the final furlong but he had to settle for fifth place, just ¾ of a length behind the winner.

The Irish Derby will only be Sir Dragonet’s fourth start of his career. The three-year-old is entered in the Eclipse Stakes, King George VI and Queen Elizabeth Stakes and St Leger, therefore, it could still end as a big season for the colt who will have plenty of supporters at the Curragh at the end of this month.