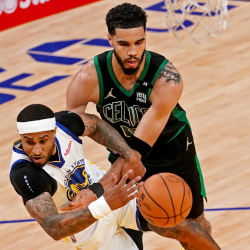 Don't look now, but it appears as if the guy the Boston Celtics have to get under control is Andrew Wiggins. And of course, that gives them one more thing to worry about when it comes to the Golden State Warriors.

BetAnySports customers who have watched the last two games of the NBA Finals have seen Wiggins, who came into the NBA as a #1 overall pick out of Kansas, pull down 29 rebounds. That is generally not considered to be his "thing," but it's what has helped propel the Warriors to within one win of the NBA title.

And that can be accomplished on Thursday night, although they are going to have to do it in hostile territory at the TD Garden. The tip for Game 6 is slated for around 9 PM ET.

According to sportsbook software data, Wiggins has received many plaudits for the way he has performed defensively. And what they say is, you can't complete a stop without getting the rebound. And he has had 25 of them on the defensive end in Games 4 and 5 combined. The general opinion coming into this series was that the Warriors were going to need all the help they could get on the boards, because of the overall size advantage the Celtics have.

But with Wiggins, and the contributions of Kevon Looney, this team has been able to hold its own.

Everybody is aware of the phenomenal run Steph Curry has been having.  When you injure your ankle in Game 4, and have to assure the media that you will indeed take the floor for the next one, then go out and put forth a dominant effort (43 points, ten rebounds), you are doing something super-human.

But the Celts, regarded by many as the league's best defensive team (and certainly the best one since the All-Star break) got tough with Curry on Monday night, holding him to 32% shooting and an incredible 0-for-9 from three-point territory. Yes, he had been carrying this offense. And yes, it may have been easy for one to get the impression that to stop him (and his Usage figure, which is always up in the 30s) was to stop Golden State. That was proven not to be the case, and that has given Boston coach Ime Udoka and his staff an awful lot to think about in this time between games.

In the NBA Finals odds that have been posted on this game by the folks at BetAnySports, the Celtics are favored to stay alive on their home floor:

Klay Thompson got hot for the Warriors in Game 5, with 21 points including five triples, and if he's on his shooting game this is a scary offensive attack. But Thompson has not been the picture of consistency. Let's face it - Golden State has pulled ahead because of defense, and Thompson is not as mobile as he was prior to his knee injury, but he's a good help defender. The Warriors need Draymond Green out there to defend, despite the fact that he's been pretty atrocious offensively and has committed far more fouls than anyone else in the series (24).

One of the "weapons" Steve Kerr has turned to that he did not employ at the beginning of the series is Gary Payton II, son of the Hall of Famer, who has inherited his father's knack for being in the right place at the right time defensively. Payton actually spent some time at the "four" spot in Game 5, which would be unusual, obviously, for someone six-foot-two, and had 15 points with five rebounds and three steals in 26 minutes. He makes things happen to disrupt the other team on his own defensive end, and thus we'd expect he is going to be utilized quite a bit here.

His presence helps us make our decision for those who want to bet on basketball. The Warriors' dominance of the third quarter ended in Game 5, as the Celtics outscored them 35-24. But we've been pretty good with the totals plays we've picked out. We know that Udoka has stressed that his team really needs to score more, rather than stop Curry, and that may be a good case to go Over 54 in the first quarter (even at a price of -115). But ultimately this is going to come down to defense, with two teams formidable in that area. G-State will have its best defensive squad out there most of the time, so we're not shy about going UNDER this total once again.

BetAnySports has everything you want when it comes to enjoying the NBA Finals. Get reduced juice on this and every game, in addition to the opportunity to do live betting through a number of different outlets, and a multitude of props to choose from..... Remember also that you can use the virtual currency of Bitcoin to make your deposits, and that never comes with a transaction fee!