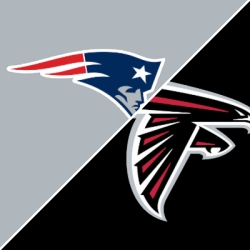 The Patriots are a half-game behind the Buffalo Bills in the AFC East with their 6-4 record (both SU and ATS). The analytics site Five Thirty-Eight has figured that they have a 68% chance to make the playoffs. And remember, there are three wild card teams.

Mac Jones is a big part of this story. What he's done in terms of sheer numbers does not necessarily blow people's doors off - 13 TD's and 7 INT's, with 2333 yards.  His poise in the pocket and decision-making are what have won over most people. He threw for 198 yards and three touchdowns in last week's 45-7 win over Cleveland, and he made some picture-perfect throws.

Over time, coach Bill Belichick and offensive coordinator Josh McDaniels have opened up more things in the playbook for him. But right now, he looks not only like the best rookie quarterback, but the best rookie overall.

Atlanta is liable to be in an ornery mood, having been throttled 43-3 by Dallas last week.

In the NFL betting odds posted at BetAnySports on this Thursday night game, the Pats are laying quite a few points on the road:

So one might ask how Matt Ryan has adapted to the offensive philosophies brought in by first-year head coach Arthur Smith. If there was a grade, it might be "incomplete."

That's because they not only said goodbye to Julio Jones in the off-season, they have now lost Calvin Ridley, whose departure is a little different, in that he has taken a leave from football to address his mental health. Tight end Kyle Pitts, the first-round pick out of Florida, got off to a slow start, although he has shown flashes of brilliance, and Belichick believes he is a superstar-level talent already.

The Falcons were faced with the absence of a running game, so they actually transitioned a wide receiver (Cordarelle Patterson) to the backfield. So it has been an adjustment, to be certain. Ryan's average depth of target is only seven yards, and that falls below short-armers like Tua Tagovailoa and Trevor Siemian. His yards-per-attempt figure is his lowest since 2013.

In other words, he's not attacking down the field.

And that might play right into the Pats' wheelhouse. They are seventh in the NFL in allowing just 6.8 yards per attempt. And the QB rating of opposing signal-callers is 84.0, which is second best.

And things might be more difficult for Ryan if Patterson can't play; he is a game-time decision with a high-ankle sprain.

New England will go with its usual formula, which is to run the ball first and go from there. With Damian Harris not available, much of it will be in the hands of Rhomandre Stevenson, a rookie who averaged 7.2 yards a carry last year at Oklahoma and had his first 100-yard game against Cleveland.

Ryan isn't going down the field. At the same time, he's bound to improve upon his 9-for-21 with two INT's he had vs. Dallas, before he was mercifully relieved by Josh Rosen. How much he'll improve is another question.

I love New England and Jones and what they're doing. At the same time, knowing that the money is going their way, I wonder whether I'd be buying too high, based on last week's disparate results. But even though the Pats have been trending "over" lately, the under looks good because you can't look at Atlanta as anything but limited, and the Pats aren't going into "shootout" mode.

Always keep in mind that at BetAnySports, you can get reduced juice, which allows you to lay a lower figure than the standard -110 on football and saves you money over time. And there are plenty of angles to look at when you access Prop Builder.......You can make your deposits with a credit card, or the virtual currency of Bitcoin, which is fast and easy with their automated system, and NEVER incurs a transaction fee!