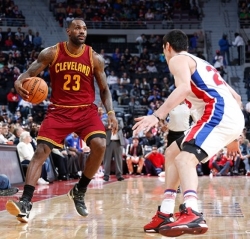 From a straight up basketball betting win/loss perspective, Cleveland has played extremely well. The Cavs have won eight of ten games overall (including all five at home) and their two losses have come by close margins – missing a chance at the buzzer in their season-opener at Chicago and then falling in double-overtime at Milwaukee. And while their +7.2 ppg scoring difference is the best in the Eastern Conference, the Cavs have not done well against the pointspread going just 3-7. That poor showing at the betting window has led to lower lines for Cleveland, who should have an easier time covering the number in the near future.

The best team in terms of ATS record (through Monday’s action) continues to be Orlando, who despite a losing 5-6 record is a league-best 8-3 against the spread (4.7 units of profit). In fact, only two of the top five ATS records belong to teams with a winning record – that being San Antonio (8-2) and Phoenix (6-4), who are both 7-3 against the spread.

At the other end of the spectrum is New Orleans and Houston. The Pelicans are a poor 1-9 straight up and 2-8 against the spread, with New Orleans backers down 6.8 units on the season.  That awful 1-9 straight up record is no excuse for their poor 2-8 ATS showing, as winless Philadelphia is a near-even 5-6 ATS. Houston is right behind the Pelicans, going 3-8 against the spread and they have come nowhere close to preseason expectations out of the gate with a losing 4-7 record. That includes five outright losses in the role of the favorite, including outright favored losses in each of their last four games overall.

We’ll be back next week to check in on the state of NBA from a betting perspective and more great basketball betting tutorials.