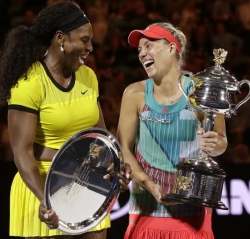 The Men’s and Women’s Finals matchups have been set for the 2016 Australian Open, with the top seeds in each division making it to the Finals and having a chance to repeat after winning this tournament last year.

On the Men’s side, Andy Roddick rallied to win the last two sets to best Milos Raonic to reach the Finals. Raonic just missed making history, as he was one set shy of becoming the first Canadian to make a Grand Slam Finals appearance.

This online sportsbook have Djokovic as a heavy favorite to repeat as champion despite facing the #2 overall seed. 1vice.ag lists Djokovic as a big -485 favorite, meaning a tennis bettor would have to lay $485 in order to win $100. A $100 wager on Roddick to pull the upset would yield a hefty $395 payout.

After coming up short in the US Open, Serena Williams looks to start a new quest for an in-season Grand Slam in 2016. She won this tournament last year – her first Australian Open title since 2010. Williams has not lost a set this entire tournament and will need to get past seventh seeded Angelique Kerber, who made it to this point without having to face a player with a ranking better than 14th.

The online sportsbooks list Serena as the heavy tennis betting favorite to best Kerber, listing the American as a big -700 favorite. Kerber returns a 5:1 payout with an unlikely upset.

More than other sports, favorites tend to win at a high rate in tennis and it’s dangerous to back an underdog hoping for a huge payday. It’s no surprise that both #1 seeds have reached this point without much of a scare, and the moneyline prices backing the two favorites seem to back up the point that underdogs pulling an unlikely upset are few and far between.

The next Grand Slam tournament is the French Open, which begins on May 22nd from Roland Garros in Paris, France. Be sure to check in with the online sportsbooks prior to that start date to see what the future odds are for the top contenders.

We’ll check in prior to the start of the French Open to review the Tennis Future odds and handicap the favorites on both the Men’s and Women’s sides.