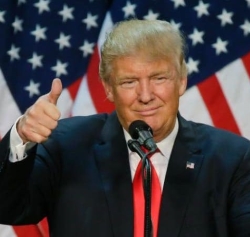 Now that Donald Trump is the President-elect and will be taking over the White House on January 20, 2017, many experts in the sports betting industry believe that there is a good chance Trump will be a big proponent of legalized sports betting.

According to R Street Institute which is a public policy think tank in D.C., Trump has a large history of gambling which could translate into his backing of legalized sports betting on a federal level.

As a supporter of gambling as seen by his many casino ventures, Trump is definitively not opposed to gambling as a business and this will be a way for him to improve the Trump economy era.

Currently, the U.S. Congress is controlled by the Republican Party and since they are in general against tax increases, finding a new source of revenue like sports betting would be the way to go.

Some of the hurdles that would be faced would include the legalization of online sports betting or at least the ability to offer betting odds online.

In addition, since the Professional and Amateur Sports Protection Act of 1992 limits sports betting to Nevada, Oregon, Delaware and Montana this act will have to be repeal first.  For the moment, they are several parties that are working on getting the PASPA act repealed and is slowly gaining momentum thanks to the rise of fantasy sports.

Even though most of the laws that ban legalized gambling were passed by Republican lawmakers, several prominent republican such as Jed Bush and Governor Christie are pro-gambling.

In the end, it all comes down to the federal and state government being in need of additional revenue sources. The U.S. deficit is now at a cool $20 trillion and the government spending continues to grow.

In fact, a recent study shows that sports betting would increase TV revenues as well.

For the online sportsbook industry, many would welcome the legalization of sports betting in the U.S. while other are not so sure since it would mean that they would have to move their operation stateside and start paying taxes.

There is definitively a big revenue potential for the federal government and the big question is whether Donald Trump will be the U.S. President to bring about a new sports betting era.