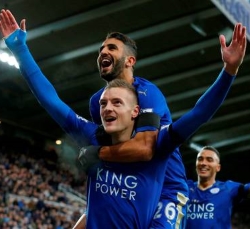 We are just past the halfway mark of the EPL Season, with more than a few surprises along the way. The biggest surprise has to be Leicester City, who is just two points behind Arsenal at the top of the tables 20 matches in. Riding the hot foot of Jamie Vardy, who along with Everton’s Romelu Lukaku leads the league in goals scored with 15, the Foxes have lost just one match since the last weekend of August. Vardy has been named EPL Player of the Month in both October and November, with manager Claudio Ranieri taking home Manager of the Month in November also.

Despite that good play, Leicester City is a big underdog this week vs. Tottenham Hotspur. Tottenham currently sits in fourth place with 36 points, but leads the EPL (along with Manchester City) in terms of goal difference at +18, and their 16 goals allowed is also the best in the league.

The online sportsbooks list the Spurs as a -150 favorite to win outright, with a draw returning +280 and an outright win by the Foxes netting a nice +415 payday. The Over/Under is 2.75 goals.

If you are unfamiliar with betting totals with quarters (not halves, like 2.5 goals), then this is how it works: a wager on the game mentioned above – let’s say Under 2.75 goals – is really two wagers. The first one will be placed on Under 2.5 goals, and the second one is placed on Under 3 goals. If the combined score of that game was 3, then you would lose the first part of the wager and push on the second one.

The biggest favorite on the board for this week is Chelsea at -280 vs. West Bromwich Albion. The reigning EPL champions have had a rough go of it lately, sitting in the bottom half of the tables and already suffering nine defeats on the season. Still, the online sportsbooks give the Blues respect after last year’s season and are heavily favored to win outright.

If the online sportsbooks are correct that Leicester City will fall this week, then Arsenal has a golden opportunity to build on their first-place standing. Currently two points up on the Foxes, and leading the EPL with 13 victories, Arsenal is a +130 favorite vs. Liverpool (draw returns +245, Liverpool is +190). Petr Ceck leads the EPL in clean sheets with nine, and will need another strong effort if the Gunners are to emerge victorious this week.

At the other end of the tables, Aston Villa seems destined for relegation, having just one victory through 20 matches. They are eleven points behind Swansea City (the last team above the relegation line) and face a tough matchup this week vs. Crystal Palace, listed as a 2:1 underdog. The other teams currently in line for relegation are Sunderland and Newcastle, who are even bigger underdogs at +430 and +360 respectively.

We’ll be back soon with another EPL Soccer Betting update.