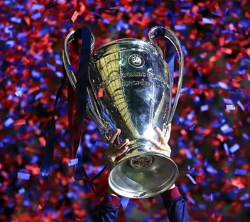 The UEFA Champions League begins the Round of 16 next week, with two matches being played on Tuesday and two more Wednesday, followed by the remaining four matches to be played early next. Remember, both teams will each play a leg on their home field, with the second leg set to begin the second week of March.

There are several soccer betting options available provided by most major online sportsbooks. Not only can you wager on the outcome of the match in typical style (bet either side to win along with an option to draw), but you can also place a bet on which team will advance to the next round.

Of course, there is always the Soccer Future wagers available, and currently Barcelona is the top choice returning 2:1, while Bayern Munich is right behind them at +225. Real Madrid (+450), Manchester City (+850), and Athletico de Madrid (+950) are the only other clubs currently returning less than 10:1 odds.

Tuesday’s matchups see Paris Saint-Germain take on Chelsea, while Benfica plays Zenit St. Petersburg. Paris SG is a solid -150 choice to emerge victorious, the highest favorite on the board for the four games total being played next week. They are also -155 to advance to the next round, with Chelsea returning a +110 payout if they can find a way to advance.

Neither Zenit nor Benfica are expected to go far in this tournament, with both clubs having odds greater than 50:1 to win it all. Benfica is even money to win Tuesday’s match, with Zenit returning +285 in an upset and the draw paying +225.

Remember, with both legs counting towards which team advances, the home side tends to go for as many goals as possible in this opening leg – not just sit back and defend a lead as they would in a normal match. Likewise, visiting clubs tend to play defensive-minded soccer for the duration of the game and will not necessarily look to change formation or send defenders forward at the end of the match just because they are losing. Keep this in mind when handicapping the first-leg matches, and of course in March when the second-leg games are played, there is a completely different handicapping approach.

On Wednesday, Real Madrid lays -120 when they face Roma, who is returning 3:1 on an upset. With the draw paying +260, the online sportsbooks are very confident in Real Madrid to play like the favorite they are and win this one rather easily.

The final match is much more difficult to handicap. VFL Wolfsburg and KAA Gent are both returning underdog payouts for a clean victory. Wolfsburg is the favorite at +125 while Gent is +215, and the draw pays even more at +240. The nice payout on the draw is very attractive. Gent, along with Dynamo Kyiv, are the biggest longshots in the tournament returning 200:1 for an improbable tournament run.

We’ll be back next week to break down the other four matchups for the first leg of the EUFA Champions League Round of 16. Good luck!