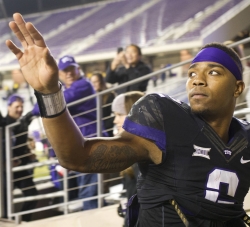 While betting bowl games against the pointspread is by far the most popular College Football betting option at this time of the season, Over/Unders are also a viable option and tends to offer more value than laying points with a favorite or taking points with an underdog.

We reviewed all the Over/Under results from the bowl games played in December, with surprising results. Over players did very well posting an 18-13 record, showing 3.7 units of profit. But we found that when the posted totals were higher, the winning percentage on those Over wagers also increased.

If the total in a December bowl game was at least 60 points, then Over players scored a huge profit on the sportsbooks. There were 15 such instances this December, with 12 of those 15 games sailing over the total. That’s an 80% winning percentage with a great +8.7 units of profit!

We didn’t stop there. There were four games in that time span that had games with a posted total of at least 70 points. The first game saw Indiana face Duke in the New Era Pinstripe Bowl with a posted total of 73 points. After the first 13 minutes of play, Duke held a 3-0 lead and the Under looked like it was going to cover with ease. But a late Blue Devils touchdown started a tremendous offensive output by both teams, who combined to score 24 points in each of the last three remaining quarters. Duke scored a field goal in overtime to win the game 44-41, meaning the game went over the total by 12 points.

The other three games with totals of at least 70 points were all played on December 29th. Air Force at California kicked off the day’s action and the total was bet all the way up to 70 points. Under players never had a chance as both teams combined for 91 points – going over by three touchdowns. The total in the Baylor vs. North Carolina game closed at 74, but the Bears and Tar Heels easily surpassed that big number, finishing with 87 points combined for a 13-point cover.

The last occurrence was the Texas Tech vs. LSU clash in the Texas Bowl. College Football bettors bet the total all the way up to 73.5 points before kickoff, but still won easily as the Red Raiders and Tigers combined to score 83 points total. That’s a 9.5-point cover and a perfect 4-0 Over record for games with totals of at least 70 points – covering by an average of 16 points per game!

There is one more bowl game yet to be played with a total north of 70 points, but that game looks scary to Over players. Oregon takes on TCU in the Alamo Bowl on Saturday evening, however TCU quarterback Trevone Boykin was arrested and won’t play.

We’ll be back next week with a sports betting preview on the National Championship Game between #1 Clemson and #2 Alabama.