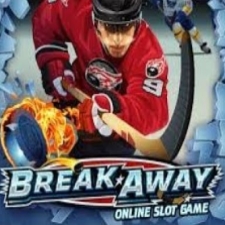 No viable theme is left unexplored in the quest for inspiration in software development. Fortunately, this has led to the creation of numerous video slots that are themed on sports. For fans of sports betting, this is an ideal opportunity to check out the 10 best sports slots that can currently be found at online casino sites.

An Introduction to Casino Room Canada

From this list, a few of the sports slots can be played at Casino Room Canada. In case you didn’t know, Casino Room is one of the oldest mobile casinos online, having opened in 1999. Functionally, the casino site is protected by state-of-the-art encryption technology while holding a license that was granted by the Malta Gaming Authority.

Compatible with mobile devices, the Break Away Deluxe slot has been developed exclusively by Stormcraft Studios for access at Microgaming casino sites. Based on the original Breakaway slot, the new version offers an expanded interface with five reels and five rows. Meanwhile, the paylines can range from 18 up to 88.

With the inclusion of the Rolling Reels feature, Break Away Deluxe shall remove all winning symbols and replace them with new ones for the next turn. The special features then include Growing Wilds and Smashing Wilds, with three or more flaming pucks necessary for receiving free spins plus a multiplier. With a run of five consecutive wins, players can unlock 60 free spins and an 8x multiplier.

Super Striker was newly released at NetEnt casino sites in 2020. In the Super Striker slot, the theme is soccer and users can score goals on their way to targeting wins from the action. Available on desktop or mobile devices, the slot has been built with a compact interface of three reels by three rows.

Although designed as a smaller slot, Super Striker isn’t short on special features. With a combination of football or golden scatters, this can lead to the activation of free spins that are comprised of five levels and an increasing multiplier. When free spins are running, each golden scatter can provide a random multiplier worth up to 50x. 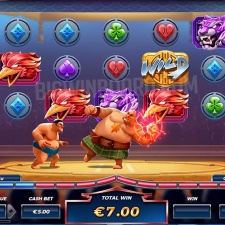 Slamming into action next is the Yokozuna Clash slot that was developed for an August 2019 release at Yggdrasil casinos. Having explored hockey and soccer, it’s now time to enter the Dohyo for some sumo wrestling. This concept was superbly chosen by Yggdrasil and the slot has been expertly designed to depict sumo wrestlers engaging in combat.

Yokozuna Clash is displayed in a 16:9 resolution across a spread of smartphones, tablets, and desktops. The slot’s interface, meanwhile, displays five reels and three rows. As for the Grand Sumo Tournament feature, this can be initiated with two scatter symbols and the rewards can include multipliers, wilds, and free spins.

This next example is one for boxing lovers. Developed by Playtech, the official Rocky slot has been produced with five reels and up to 25 paylines that can remain active. Along with playing card symbols, there are images of Rocky Balboa, Apollo Creed, and Clubber Lang from the hit movie series starring Sylvester Stallone.

One of the best features is the Knockout Bonus, which is a special round where you can select an opponent for Rocky. The Italian Stallion will then go 10 rounds with his foe to hopefully score winnings. By the way, free spins can also be triggered in Rocky.

Hots Shots 2 from iSoftBet is an ideal option for any users seeking a more playful version of soccer. In this five-reel slot, a pack of cartoon animals takes to a 3D soccer pitch located in a warm, bright forest. Next to the animals, there are playing cards that can be matched in 243 different ways of winning.

In Hot Shots 2, the action can be transformed by expanding wilds, golden wilds, and logo symbols that can unleash up to 20 free spins. iSoftBet has also included the ULTRA BET feature for users to play 50 games for 50x times the current stake.

When it comes to football, Gridiron Glory is the ideal slot and it can be found at casinos on the Bodog/Bovada network. Although designed with older graphics, this five-reel slot more than holds its own at the line of scrimmage. After all, you can never overlook the trenches when betting on NFL.

In Gridiron Glory, the slot can impress with 243 ways of winning, with the stacked wilds lending a hand to substitute for absent symbols. However, the star player has got to be the free spins that can be activated from within the bonus features. 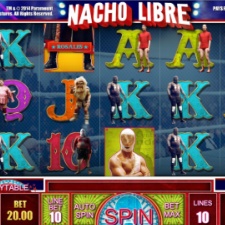 Although staged, professional wrestling can be hugely entertaining, especially when you throw in some flair from south of the border. What also draws gamers into the Nacho Libre slot is the fact that the game is licensed on a 2006 comedy movie starring Jack Black as a Luchador, which is a type of wrestler famed in Mexico.

In Nacho Libre, players can align colorful wrestlers over five reels for the chance to win. iSoftBet has also integrated stacked symbols and landing all five on the screen can trigger the jackpot. However, a simpler special feature is to trigger free spins and a multiplier.

For tennis fans, there’s debate whether America, Australia, France, or the UK has the best major tournament. Regardless of how you feel, it’s worth trying Centre Court. This game was released years ago by Microgaming and it remains the tennis slot in the marketplace.

Centre Court uses the trusted formula of providing five reels and three rows. This interface provides the base for players to attempt match to symbols along the nine adjustable paylines. Amid the special features, there are free spins and the ability to score a win of up to 450,000 coins.

Football Star Deluxe is the second video slot from Stormcraft Studios to appear on this list. This time, the studio has opted to make a soccer slot. As with Break Away Deluxe, Football Star Deluxe is exclusively playable at Microgaming casinos, having undergone a widespread release in May 2020. In the base game, there are five reels and five rows while the number of paylines can shift through 18, 38, 68, and 88.

Rolling Reels will again make an appearance in this slot, which offers the ability to receive free symbols that replace any that have just formed a winning spin. Meanwhile, Striking Wild is a feature that can create an entirely wild reel. Finally, there are free spins to trigger by landing three or more scatter symbols.

Horse racing might not be everyone’s idea of a spectator sport, but there can be no denial of its potential for sports betting. Developed by NetEnt, the Scudamore's Super Stakes slot was developed in collaboration with legendary jockey Peter Scudamore, who accumulated 1,678 wins during a 30-year career.

By design, Scudamore's Super Stakes is a five-reel slot with three rows and 20 fixed paylines. The slot is compatible with either mobile or desktop screens and the central appeal lies with the bonus features. The random wilds can help, though not as much as landing three scatters to enter Peter’s Classic Cup. This causes an extra row of symbols to appear and for up to 32 paylines to be active while a horse racing mini-game is hosted.