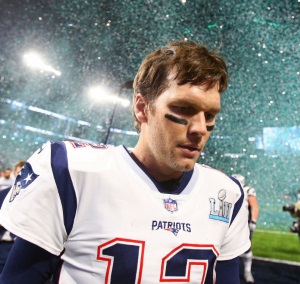 For the moment, Tom Brady's current deal will be over after the 2018-19 season.  Historically, the Patriots have extended his contract with two years remaining. His annual salary of $14 million with a $22-million cap hit the next two seasons.

Of course, the issue is not under pressure at the moment since there is still plenty of time before the season starts.  Some speculate that he is trying to lock in a contract before his age starts to show on the field this season.

Head Coach Belichick acquired an additional first-round pick from the LA Rams in exchange for wide receiver Brandin Cooks.  This move clearly shows that the Patriots are looking on building their team roster this year before Brady retires.

In terms of new blood, the Patriots have expressed that they are interested in drafting Josh Rosen the Quarterback from UCLA. Even though they have expressed their interest, whether they put a bid on him will depend on how Rosen ends up overal.

In addition, several sportsbook pay per head review websites have been showing interest in how this will affect future NFL bets for the 2018-19 season.