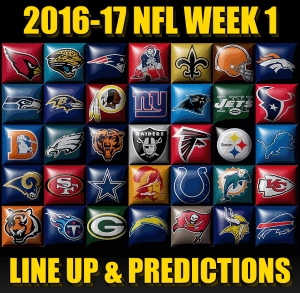 Today is the Day!  That’s right NFL betting fans and just you regular football fans out there, the NFL seasons start tonight at 8:30M ET when the  Carolina Panthers take on the Denver Broncos to kick off the new season.

No matter which team you support its time to dust off that old NFL jersey, make a beer and snack run an get ready for some action.

The online sportsbooks have been taking bets all week long and expect a flood of bets coming in all day long.  To keep bettors interested, most of the online bookies are still giving out some early bird specials to try and reel you into placing their bets with them.

Before we get into our NFL Week 1 Predictions, let’s take a look at the line up.

Some of the major ones include BetOnline.ag, BetAnySports.eu and BetPhoenix.ag who each offer some great deals for the serious and the recreational gambler.

BetOnline, one of the top sportsbook in the business who almost never give out any bonus higher than 30% are giving out a 50% bonus for a very limited time so now is the time to enjoy a large bonus from a top sportsbook.

BetAnySports.eu, a known and trusted sportsbook that has been around since 2001 and has been rated as one of the best sportsbook by all sportsbook reviews websites!

This season, BetAnySports is giving away a 32% bonus when you use the Promo Code: SOS32.  This an excellent deal if you are looking for a book that has the some of the best football odds around! BetPhoenix.ag, also known as the king of promotions is giving away a whopping 200% bonus for new customers.  If you are looking for a big bonus from a sportsbook that pays, this is the one to chase.

Some of the top Predictions for NFL Week 1

In a rare occurrence, in the Panthers vs. Broncos matchup the Super Bowl 50 defending champions find themselves the underdog according to the football handicappers at +3.  The reason behind it is that they will be using Trevor Siemian as their starting quarterback who lacks any NFL experience other than one career snap which was a kneel down.

For the Buccaneers vs. Falcons matchup, Tampa is the underdog at +3 and we expect the Falcons to cover the spread. Even though both team have more or less similar offensive strength, they do have the advantage in the passing game and the interception factor.

In the Vikings vs Titans matchup, the Vikings will barely win against the Titans despite Teddy Bridgewater suffering from a torn anterior ligament.  However, we still expect them to cover the spread as the Titans offense is one of the worst in the league.